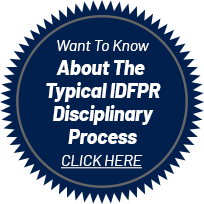 The U.S. Department of Education defines massage therapy as “manual techniques for manipulating skin, muscles, and connective tissues.” Technically speaking, massage refers to any touch or pressure-based treatment of the body. However, alternative therapies sometimes go beyond this definition, giving rise to the term bodywork, which describes manual therapies based on less conventional medical principles.

Massage Therapists are regulated by the State of Illinois. There are a number of different statutes that apply to Massage Therapists, as well as extensive administrative regulations. The primary statute that regulated the profession is the Massage Licensing Act. The law and regulations include:

The significant regulation for massage therapists reflects the government’s interest in protecting the health, safety, and welfare of citizens. Only massage therapists who meet specific requirements are permitted to practice in Illinois. Massage Therapy Professions Licensed by IDFPR:

The practice of massage is widely known as a way for people of all ages to relax and heal worldwide. But what may not be common knowledge is how Asian Bodywork Therapy (ABT) differs from other forms of massage, resulting in a legal loophole that will be closed by the Illinois Massage Licensing Act (225 ILCS 57/25). Starting in January 2020, practitioners in Illinois will need a license to perform Asian Bodywork Therapy in a professional capacity, just as other professional massage therapists.

When Can a Massage Therapist Lose His or Her License — or Face Professional Discipline — in Illinois?

The Massage Licensing Act contains numerous types of conduct that can warrant disciplinary action. Examples of issues regulated by the Act and the corresponding administrative rules include:

Asian Bodywork Therapy (ABT) is the official term used by the National Certification Commission for Acupuncture and Oriental Medicine (NCCAOM) to designate a set of distinct manual therapy modalities that rely on the principles of Traditional Chinese Medicine (TCM). At present, there are as many as 17 recognized forms or styles of ABT. These styles incorporate therapies involving principles like qi, or a person’s vital life force, into the therapy, which does not quite fit the legal definition of massage. A TCM approach to healing the body is radically different from the model used in Western medicine.

In the past, the differences between massage therapy and ABT have been wide enough to maintain a clear legal distinction when it comes to regulation and licensing practitioners. But new changes to the Illinois Massage Licensing Act are designed to bring the practice of ABT more in line with the way that all alternative therapies, including massage, are regulated by the state. The express purpose of the Illinois Massage Licensing Act is to “protect and benefit the public by setting standards of qualifications, education, training, and experience for those who seek to practice massage therapy…and to protect the public from unprofessional conduct by persons licensed to practice massage therapy” (225 ILCS 57/5).

The revised law, which will take effect in January 2020, closes a loophole that had allowed unregulated “bodywork” businesses to flourish throughout the state.

In addition to addressing the public health, safety, and welfare concerns related to actual ABT services, these changes in the regulation of ABT also arise out of broader concerns about how the massage and bodywork industry has been used to facilitate and hide much more questionable activities. The additional licensing requirements described by the Act aim to bring oversight to an industry that has too often been used as a front for illicit sex trade.

Illicit prostitution businesses using “massage” or “bodywork” as a cover have become increasingly more common throughout the United States, and not just in larger cities like Chicago or New York. Polaris estimates there are as many as 9,000 illicit massage businesses in the U.S., and 300 in Illinois. In many cases, these businesses exploit young Asian women who have been lured to the United States with false promises of a better life. What is more, police have not been able to investigate a large portion of the criminal activity in this area due to the way the current law reads. By placing stricter regulations on the massage and bodywork professions, legislators hope to curb the rising tide of illegal sex work and better protect the health and well-being of the public statewide.

How We Can Help

1818 represents individuals and businesses whose license is in jeopardy of being disciplined, suspended or revoked.

1818 has substantial experience with city, county and state agencies, and uses legal and government relations strategies to effectively represent clients.

The firm lobbies at the state and local level on issues regarding procurement, legislation and administrative rules.

Please fill out all fields and submit to request your consultation.
Call Now Button